John Kirriemuir reports on a British Library Labs and University of Nottingham event in the National Videogame Arcade on 3rd February.
Introduction
British Library [bl] Labs [bll] are currently running an initiative funded by the Andrew W. Mellon Foundation [awmf], where they look for new or novels ways of manipulating, enhancing or presenting their considerable digital collection and data holdings.The Labs are holding a Spring 2016 roadshow [roadshow]. One stop was in Nottingham, where the Labs organised a joint workshop with the Digital Humanities and Arts Praxis project [praxis] from the University of Nottingham. The location enticed me to attend...
Location
The event was held at the National Videogame Arcade [nva]. This large city centre building functions as a museum of digital and video games, and as a centre for gaming, programming and technology events and courses, such as learning about Arduino or developing with Unreal Engine or within Minecraft.
The event was held in the lounge of the arcade. Attendance meant having to walk past playable games, such Zelda: Ocarina of Time [zelda] running on a Nintendo 64. Attendees also arrived to an excellent buffet lunch of varied sandwiches, a salad tray, hummus and pita bread. The lunch gave us an opportunity to refuel, ‘network’, and have a brief UKOLN alumni meetup. Then, it was down to business...
Art Maps
Laura Carletti, a research fellow at the University of Nottingham, was the first presenter. She spoke about ArtMaps [artmaps], a platform which encourages members of the public to add data to digital objects held by the Tate. Events were planned around existing metadata and additional acquisition, such as encouraging people to visit the physical locations where photographs were taken.
Wander Anywhere
Ben Bedwell, also a research fellow at the University of Nottingham, spoke next. He described the Wander Anywhere [wander] app, which geolocates Wordpress content onto a Google Map. He detailed some previous uses of this initiative, such as ‘Anywhere Somewhere Everywhere’ in 2008. Here, a person roamed the streets following instructions on their mobile phone, not realising they were being fed live data - for example, “look out for the red car that’s passing you” - by a project member following them at a discrete distance. This project was supposed to incite the negative emotions that arguably come from intense surveillance systems, such as fear and paranoia, but it unexpectedly found that users enjoyed the experience. 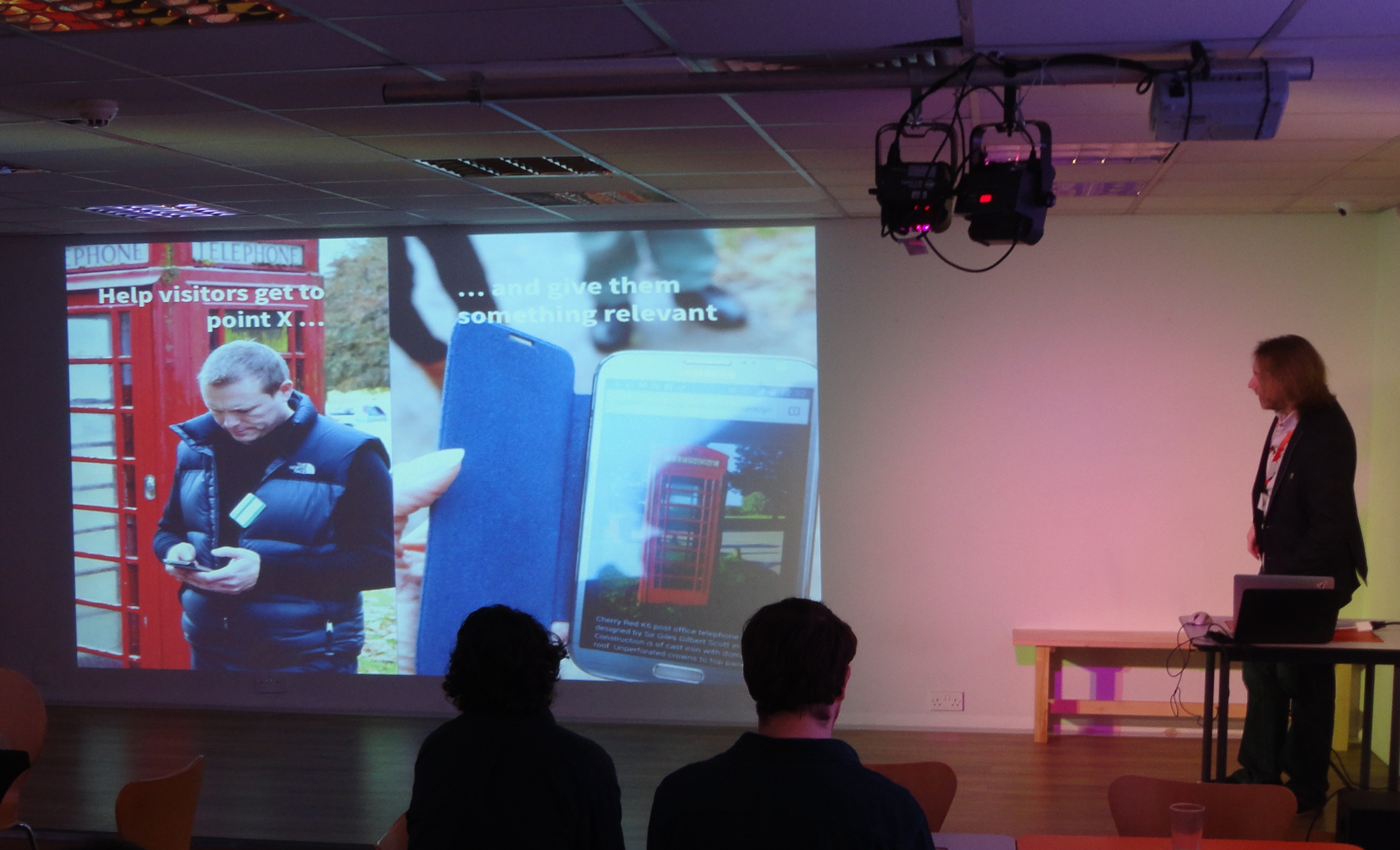 Watching the presentation of the Wander Anywhere project
British Library Labs: Experiment with our digital collections
Mahendra Mahey was the first speaker from the British Library. The BL holds around 180 million items (the exact figure is not known), of which around 2% are either ‘born digital’ or digitised copies of tangible things. He introduced some of the work and collections that the Labs department deals with. A core component of this work involves figuring out who is using the content and why, how they can be supported, and experimenting with the content and associated data through various media such as digital games.
Getting to the motive of the event, Mahendra outlined the BLL 2016 competition [competition]. With an entry deadline of 11th April, two selected finalists will work with the BLL team, getting support so they can build systems that demonstrate or provide new means of visualising, or enhacing, the British Library’s digital collections. For example, one of last year’s winners, ‘Crowdsourcing Objects’ [co] used a classic video arcade cabinet as a mechanism for ‘players’ to add metadata (in the form of simple tags) to the British Library’s Flickr image collection [blflickr].
The BLL 2016 awards [awards] were also described. These also focus on projects, tools and other work which make use of the British Library’s digital collections and data. With an entry deadline of 5th September, prizes are categorised for research, commercial, artistic, and teaching and learning projects. A recent award runner-up was Nix [nix], a Virtual Reality game made for the Oculus Rift where players reconstruct Fonthill Abbey [fonthill].
Farces and Failures
Ben O’Steen, also from British Library Labs, then spoke about BL Lab projects and collections from a data management perspective; this was my personal highlight of the day. ‘Farces and Failures’ [ben] described some of the more common misunderstandings in the library world, including the (multiple) meanings of the words collection, access, content, metadata (“one person’s data is another person’s metadata”) and crowdsourcing. 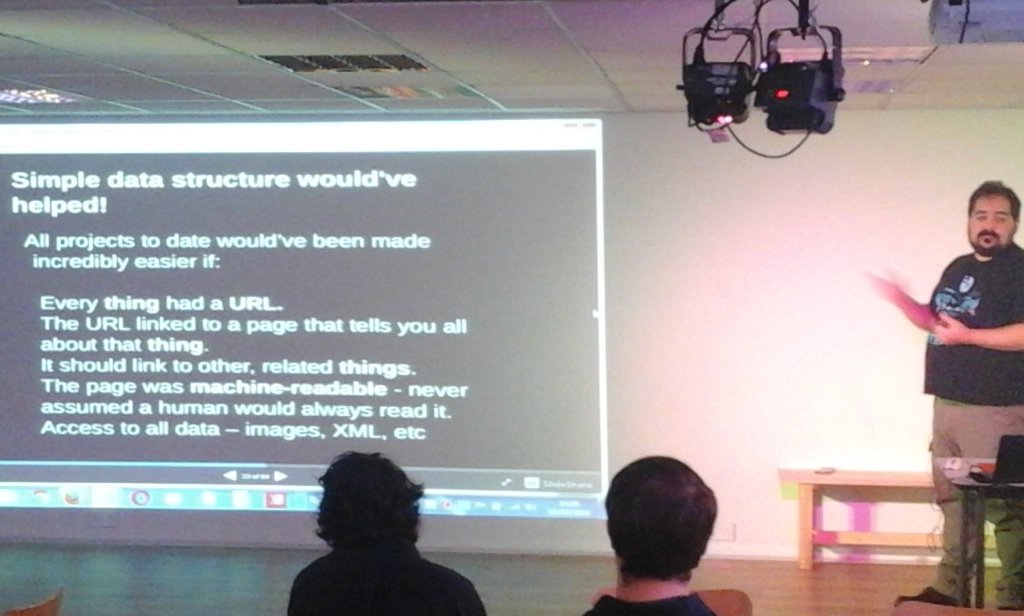 Ben O'Steen explaining how Open Data projects can be made easier
Ben described a range of British Library collection or data-oriented initiative, such as the Microsoft Books project which digitised some 49k works between 2007 and 2009. He outlined some of the problems with data, metadata, incomplete collection development, and the accessibility of digitised materials. In more detail, the British Library Flickr [blflickr] collection was interesting, containing over a million items, and so far notching up around a third of a billion ‘hits’ and half a million tags added by the public.
There was further mention of the video game arcade cabinet and the recent British Library Labs Crowdsourcing Game Jam [jam]. A few of the games created for that event, such as Art Treachery and Tag Attack, were described. The prototype of one, Trustbear [trustbear], is playable in a web browser; in this simple left/right game, the player quickly decides whether an image from a British Library digital collection contains a face or not.
British Library data: a look and some ideas
The motivation for this roadshow of events is to entice people into dreaming up ideas for the aforementioned competitions and rewards, and hopefully nudging them into carrying them out. Therefore the last hour of the event was a meta-game, with teams being enthusiastically cajoled by Mahendra to think up a feasible system which would use British Library collections of digital data.
The Labs people had brought a server containing some of these collections for quick local access and examination, as well as a small mountain of paperwork describing file content, quality and the associated metadata.
Our team devised a game, ‘Playbill Pokemon’, based around volumes of digitised theatre playbills. The aim was to capture, collect and ‘own’ these collections by entering more substantial, and correct, metadata than their current ‘owners’. Though a half-baked and literally 30 minute project between two strangers, Dominic produced a splendid screen mockup. But, possibly as we ignored the large hint about OCR quality in the collection, or probably as I started rambling about metadata granularity and quickly lost the (non-librarian) crowd, our team failed to win.
Instead, the more worthy winner outlined a neat project where Victorian era digital content would be enhanced through karaoke-like system. The winner generously handed out his prize of a bag of goodies from the British Library shop to all, pleasantries were exchanged, people departed and I spent a final few minutes playing Zelda. 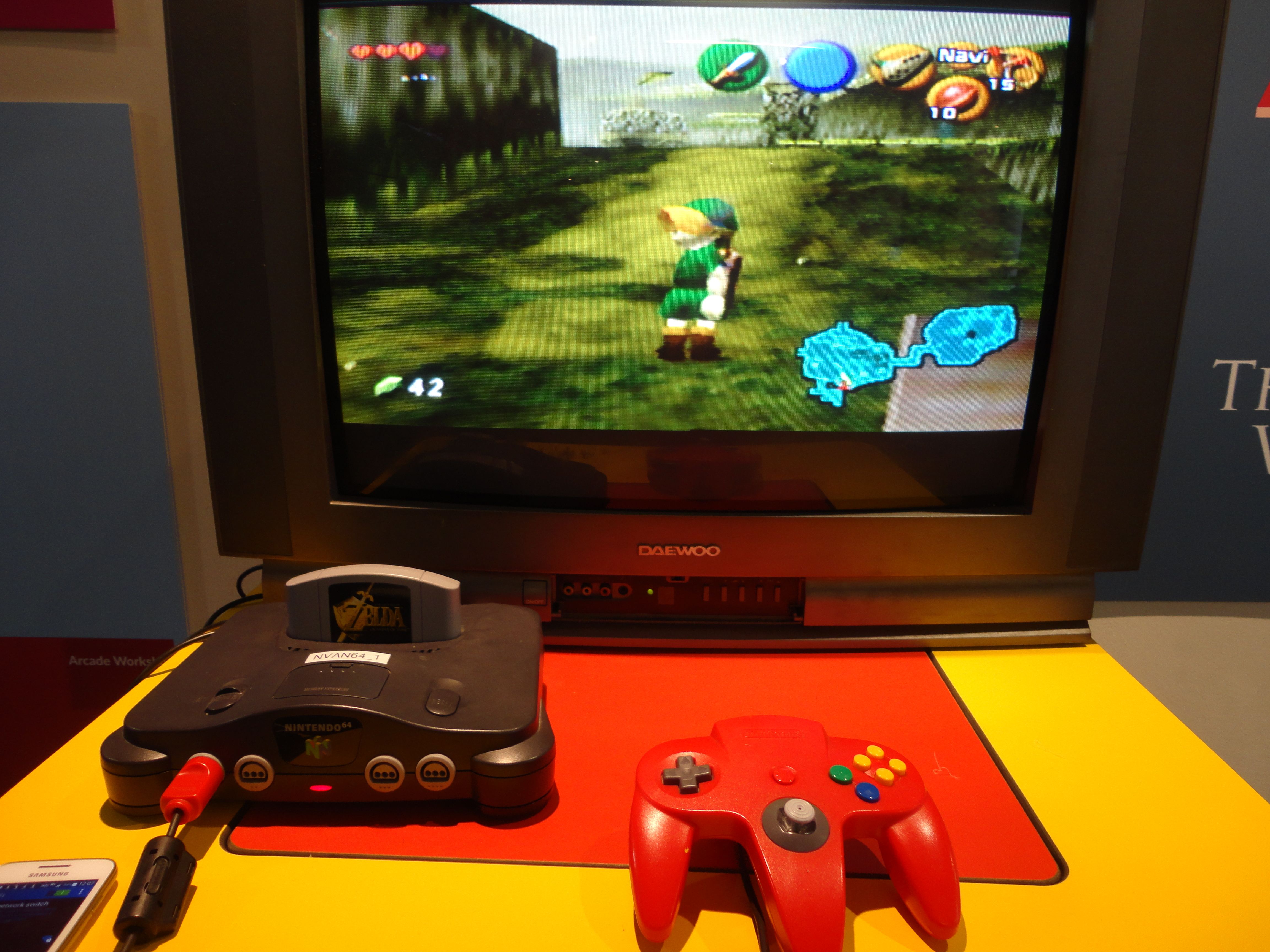 Zelda at the National Video Games Archive
Conclusion
This was an enjoyable event. Ben O'Steen's presentation was a highlight, and is pertinent to anyone grappling with how to access, manipulate, make sense or process collections of large amounts of digitised content. I am an unashamed fan of Flickr - partially as, unlike digital ephemera systems such as Instagram it provides the ability to curate metadata. Therefore, the parts of Ben’s talk describing the British Library image collections and the issues surrounding data and access enhancement were particularly interesting.
The mini game jam was entertaining. If you’re thinking of entering either the competition or the award, it’s well worth attending one of the roadshow events so you can get a closer look at some of the collections and their associated metadata.
Finally, the National Videogame Arcade is a splendid and game-filled venue right in the centre of Nottingham. It’s open to the public Friday through Sunday, and on school holidays. If you are one of the many who’ve spent several decades playing video games, there’s likely to be a slice of nostalgia [games] there that will appeal to you.
References
[bl] British Library. http://bl.uk
[bll] British Library Labs. http://labs.bl.uk
[awmf] Andrew W. Mellon Foundation. http://mellon.org
[roadshow] British Library Labs Spring 2016 roadshow. http://britishlibrary.typepad.co.uk/digital-scholarship/2016/01/the-bl-labs-roadshow-2016.html
[praxis] About the Praxis project. http://dhapraxis.wp.horizon.ac.uk/about
[nva] National Videogame Arcade. http://gamecity.org
[zelda] The introduction to Zelda: Ocarina of Time. http://youtube.com/watch?v=CtMllWsML5M
[artmaps] Art Maps at the Tate. http://tate.org.uk/about/projects/art-maps
[wander] Wander Anywhere app. http://nottingham.ac.uk/art-history/research/projects/wander-anywhere.aspx
[competition] British Library Labs Competition 2016. http://labs.bl.uk/British+Library+Labs+Competition
[co] ‘Crowdsourcing Objects’ project. http://britishlibrary.typepad.co.uk/digital-scholarship/2015/06/bl-labs-competition-winners-for-2015.html
[blflickr] British Library image collection on Flickr. http://flickr.com/photos/britishlibrary/albums
[awards] British Library Labs awards. http://labs.bl.uk/British+Library+Labs+Awards
[nix] Nix. http://britishlibrary.typepad.co.uk/digital-scholarship/2015/12/bl-labs-creativeartistic-award-2015-runner-up-project-nix.html
[fonthill] Fonthill Abbey (wikipedia). http://en.wikipedia.org/wiki/Fonthill_Abbey
[ben] Farces and Failures. http://slideshare.net/benosteen/citylis-talk-feb-1st-2016
[jam] British Library Labs Crowdsourcing Game Jam. http://itch.io/jam/britishlibrary
[trustbear] Trustbear game prototype (web browser version). http://acrymble.itch.io/trustbear
[games] Playable games, as of February 2016, at the National Videogame Arcade. http://flickr.com/photos/silversprite/24796911815/